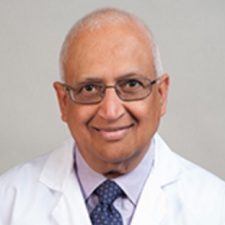 Raman Sankar, MD, PhD, is Professor of Neurology and Pediatrics and Chief of Pediatric Neurology at the David Geffen School of Medicine at the University of California, Los Angeles. He holds the Rubin Brown Distinguished Chair in Pediatric neurology. Dr. Sankar is a graduate of the University of Bombay, India. He obtained his PhD from the University of Washington in Medicinal Chemistry and was involved in teaching and research for several years prior to entering Tulane Medical School, where he obtained his MD. He trained in pediatrics at the Children’s Hospital of Los Angeles and completed his training in neurology and pediatric neurology at UCLA.

Dr. Sankar’s laboratory research has addressed the mechanisms of seizure-induced injury and epileptogenicity in the developing brain, and is funded by the NINDS, NIH. Present research also includes investigations on improving the throughput for screening compounds for antiepileptogenic action on the developing brain and modeling the comorbidity of depression that accompanies epileptogenesis. Recent work by Drs. Mazarati and Sankar have demonstrated connections between the epileptic state, physiologic stress, inflammation and how these factors modify the serotonergic tone in the brain stem-hippocampal pathways.

Dr. Sankar is a reviewer for research grants submitted to the National Institutes of Health, Epilepsy Foundation, CURE, American Epilepsy Society and other organizations. He is a member of an active pediatric epilepsy program at UCLA that is well known internationally for many advances in pediatric epilepsy surgery. Dr. Sankar has authored more than 170 research articles, reviews and book chapters and has served on the editorial boards of Epilepsia and Epilepsy Currents. He is an elected Fellow of the American Academy of Neurology, a member of the Professional Advisory Board of the Epilepsy Foundation, and a member of the Commission on Neurobiology of the International League Against Epilepsy.