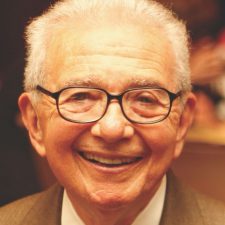 Dr. Kenneth F. Swaiman is an internationally known child neurologist and Emeritus Professor of Neurology and Pediatrics at the University of Minnesota Medical School where he was the director of the Division of Child Neurology for several decades. He also served as Interim Head of the Department of Neurology. During his tenure, he was involved training nearly 100 pediatric neurologists from the United States and Canada, as well as many other countries.

Dr. Swaiman’s investigative endeavors have included research into brain energy metabolism, the effect of malnutrition on the developing brain, and the metabolic effects of iron and other metals on brain function. He has been particularly involved in studies of Neurodegeneration with Brain Iron Accumulation (NBIA) and other childhood movement disorders.

Dr. Stephen Ashwal has been a member of the Division of Child Neurology in the Department of Pediatrics at Loma Linda University Children’s Hospital since 1976 and currently serves as Chief of the Division. He received his medical degree from New York University School of Medicine in 1970, did his pediatric training at Bellevue Hospital in New York and completed his training in child neurology at the University of Minnesota. He is board certified in pediatrics and in adult neurology and psychiatry with special competence in child neurology.

Dr. Ashwal has been an active member of the Child Neurology Society since 1975. He was elected by the CNS members to serve on the CNS Board of Directors as both Secretary-Treasurer (1993-97) and President (2001-2003). Dr. Ashwal received the Society’s highest honor, The Hower Award, in 2008 at the CNS Annual Meeting in Santa Clara, CA. A longtime member of the AAN QSS committee, Dr. Ashwal has been a prime moving force behind the development, with CNS endorsement, of several pediatric neurology practice parameters. He most recently served on the Board of Directors of the Child Neurology Foundation. He is also serves as a director of the Muscular Dystrophy Association.

Dr. Ashwal has written or edited several books in the field of child neurology, including Swaiman’s Pediatric Neurology: Principles and Practice. He is a longtime leading figure in research related to areas of acute brain injury in children and serves as co-director of the Pain Assessment Clinic at Loma Linda University Medical Center.