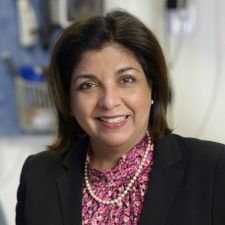 Yasmin Khakoo, MD, FAAN, FAAP is a board-certified Pediatric Neurologist & Neuro-oncologist and Child Neurology Director at MSK Kids at Memorial Sloan Kettering and
Professor of Clinical Pediatrics at Weill Cornell Medical College (WCMC), New York, NY. She received her B.A. in Chemistry from Barnard College and M.D. from Columbia University, and trained in Pediatrics and Child Neurology at University of California, San Francisco and in Neuro-oncology at MSK. She is currently Chair, Scientific Selection & Program Planning Committee of the CNS and a member of the Leadership, Diversity, Equity and Inclusion (LDEI) committee and Neuro-oncology SIG. Dr. Khakoo completed the American Academy of Neurology Women in Leading in Neurology 1-year program in 2019 and became a Fellow of the AAN in 2021. She is the Topic Chair of the Child Neurology Scientific Selection Committee of the 2022 AANAM and is the Vice-Chair of the Advancing Women in Academics Subcommittee. In addition to caring for children and young adults with brain tumors, she is an international expert in the field of rare pediatric neurological diseases including congenital melanocytic nevi/neurocutaneous melanocytosis and neuroblastoma-associated opsoclonus myoclonus ataxia syndrome. She is also involved in research collaborations to preserve quality of life and cognition in pediatric patients receiving treatment for all cancers. She received the 2018 Brooke Healey Butterfly Award for Compassionate Care. She is involved in teaching and mentoring at all levels and received the Pediatric Neurology Teaching Award at WCMC in June 2021. Finally, Dr. Khakoo became Editor-in-Chief of Pediatric Neurology in January 2022. She is passionate about making leveling the playing field in the LDEI space, specifically for women and other
underrepresented groups. 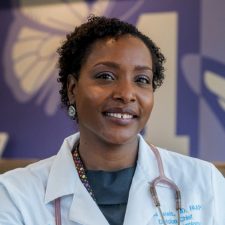 Dalila Lewis, MD, FAAP is a pediatric neurologist and epileptologist currently serving as Division Chief of Pediatric Neurology at the Medical University of South Carolina. Academic and clinical interests include refractory epilepsy and surgical management, neuromonitoring in critically ill neonates and children, and supporting the transition from pediatric to adult epilepsy clinical environments.

Dr. Lewis began her medical career as an Air Force officer, earning her Doctorate of Medicine from the Uniformed Services University of the Health Sciences in Bethesda, Maryland, and completing her Pediatrics Residency and Child Neurology Fellowship prior to separating from Active Duty military service. She subsequently completed a two-year Epilepsy Fellowship at Johns Hopkins Hospital in Baltimore, Maryland.

Prior positions held have included the Chief of Pediatric Neurology at Portsmouth Naval Medical Center in Virginia and the Medical Director of the Pediatric Epilepsy Monitoring Unit at the University of Wisconsin-Madison. She is an active member of several professional organizations to include the American Academy of Pediatrics, American Academy of Neurology, Child Neurology Society, American Epilepsy Society, and American Clinical Neurophysiology Society. Dr. Lewis has served on the board of the Epilepsy Foundation in Wisconsin and is an active participant in several community advocacy organizations to include the South Carolina Advocates For Epilepsy.