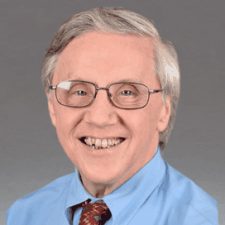 Dr. David Coulter is the recipient of the 2017 Child Neurology Society/Arnold P. Gold Foundation Humanism in Medicine Award. While Dr. Coulter has made wide ranging contributions to child neurology in the areas of neurometabolic disease, epilepsy, disability education, and ethics, he is best known for his dedication to and advocacy for children with intellectual and developmental disabilities. The CNS recognizes his career long commitment to the field of Neurodevelopmental Disabilities (NDD) and his dedication to the humanistic care of children with NDD and their families. In Dr. Coulter’s very first published article (JAMA, 1980), he pleaded for a humanistic approach to children with NDD. That dedication continues to define his career.

Dr. Coulter received his BS degree from the University of Notre Dame in 1969, and his MD from Yale School of Medicine in 1973. A clinical rotation in neurology with Dr. Gilbert Glaser at Yale convinced him that clinical neurology would be his career choice. A later elective with Dr. Peter Huttenlocher ignited his interest in child neurology.

During his pediatric residency at Duke University (1973-1975), a clinical child neurologist, Dr. Jim Renuart, instilled in him the importance of developing a personal relationship with every patient regardless of disability. Dr. Russell DeJong offered him a residency position at the University of Michigan and taught him how to become a neurologist. During this time, Dr. Coulter started and ran several free clinics for indigent children with neurological problems and also started a neurology clinic at the University’s

Student Health Service. Dr. Richard Allen, one of the founding members of the CNS and the division chief in Ann Arbor, became Dr. Coulter’s most influential mentor. They worked closely together every day for six years. Most of Dr. Coulter’s early publications were co-authored with Dr. Allen, including the first descriptions of benign neonatal sleep myoclonus and valproate-associated hyperammonemia.

Both Dr. DeJong and Dr. Allen helped him move to a position at the University of Texas Medical Branch in Galveston, where he soon achieved both promotion and tenure. His career took off after that, defined throughout by the three fellowships completed along the way, including one in Cerebral Palsy at the University of Michigan (1978), Bioethics at Harvard Medical School (1997-1998) and the Schwartz Center’s Clinical Pastoral Education Fellowship at Massachusetts General Hospital (2012).

Dr. Coulter dedicated his career to the care of children with intellectual and developmental disabilities. He joined the American Association on Intellectual and Developmental Disabilities (AAIDD) in 1982 and would later become AAIDD President (2004-2005). He co-authored the 1992, 2002 and 2010 editions of the AAIDD manuals on the definition and classification of intellectual disability. He helped the U.S. Surgeon General create the 2002 report on health care for people with intellectual disability. Dr. Coulter provided free care for poor, disadvantaged and disabled children throughout his time in Texas (1981-1986) and subsequently at Boston City Hospital (1986-2000) where he was the Chief of Child Neurology. He moved to Boston Children’s Hospital and Harvard Medical School in 2001, where he continues to serve as senior staff neurologist and associate professor of neurology. Dr. Coulter served for 26 years as the neurologist for the Perkins School for the Blind and continues to serve as the neurologist for the New England Center for Children, a residential school for autism, both located in Massachusetts.

Dr. Coulter is also a poet. His 2017 collection, Disability, Doctoring and Patient Care: Poems from a Life in Medicine reflects on his life and career choices, as well as the bravery he has witnessed in his patients and his gratitude for all that they have shared with him.