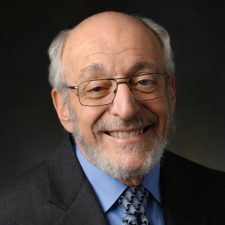 Dr. Baumann first joined the faculty at the University of Kentucky in 1972, having been recruited by the Department of Neurology’s first chairman, Dr. David B. Clark, himself a Child Neurologist (and recipient in 1974 of the Hower Award); he has remained at UK his entire career. Recognizing the true need in the state, Dr. Baumann immediately became the Director of the Regional Neurology Clinics under the auspices of the Kentucky Commission for Children with Special Healthcare Needs (which became the Kentucky Office for Children with Special Healthcare Needs). The program flourished under his guidance. UK Child Neurologists now provide care for children on a rotating basis in six regional clinics located in underserved areas of central and eastern Kentucky. These clinics also serve as a unique additional venue for training our Child Neurology residents and medical students.

Dr. Baumann was called on as a consultant and advisor for national and international panels and groups. He was a member of the NIH-NINCDS Review Committee A (1980-1984), NIH Technical Merit Review Panels (1977, 1981) the Behavioral Neuroscience Study Section (1985), and a panel member for an NIH Study Site Visit Team (1986) and the NIH Epidemiology and Disease Control Study Section (1988-1990, 1993). He was a member of the Health Committee for the Kentucky-Ecuador Partners of the Americas Health Committee (1987-2014, Chair 1989-1991), an examiner for the American Board of Psychiatry and Neurology (1976-2006), an Advisory Board Member for the Kentucky Epilepsy Foundation (1976-1978), and a consultant for the American Academy of Pediatrics’ Committee on Practice Parameters (1992-2016).

Despite his heavy clinical and administrative responsibilities, Dr. Baumann found time for scholarly work and service. He authored or co-authored 76 peer-review reports, many of which were published in top-tier journals including American Journal of Epidemiology, Annals of Neurology, Neurology, JAMA, Journal of Child Neurology, Pediatric Neurology, Neuroepidemiology, and Pediatrics. He was a member of the editorial boards of the Journal of Child Neurology (1987-1993), Pediatric Neurology (1986-1993) and an ad hoc reviewer for several other prominent journals including New England Journal of Medicine, Epilepsia, and Lancet Neurology. Over his career, he also served as a co-investigator or sub-investigator for several clinical trials aimed at bringing new treatments to children with neurological conditions.

As Chief of the UK Division of Child Neurology since 1979, Dr. Baumann not only led our related clinical programs but has also been a role model and effective advocate for resident education. As Child Neurology is a division of our Department of Neurology, he always brings his expertise and experience to all of our educational conferences. He directed our Child Neurology residency program for several decades with his trainees practicing neurology throughout the country and in other countries, the majority in academic settings.

Dr. Baumann has dedicated his adult life to Child Neurology. He has had long-lasting and significant contributions to providing care to underserved populations, academic service, scholarly work, and medical education. He has trained generations of Child Neurologists, contributed to the growth of the profession, and has been singularly dedicated to providing high-level neurological care to children with limited access to healthcare services residing in rural areas of our Commonwealth. He continues to work tirelessly in support of our programs, trainees, and the patients we serve through his efforts in our institution, region, nationally, and internationally.