Conversation between Drs. Bernard Maria and N. Paul Rosman recorded at the 47th Annual CNS Meeting in Chicago, October 2018 in advance of presentation of the Hower Award to Dr. Maria. 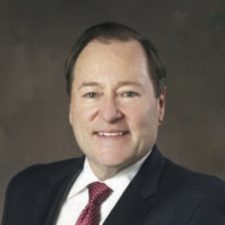 Since the birth of the Child Neurology Society in 1972, Bernie Maria has been one of the most visionary and scientifically productive of the Society’s more than 2,000 members.  He has assumed important leadership positions in a number of major medical centers.  The challenges that he has chosen to undertake and the successes that he has achieved continue to escalate with remarkable rapidity.

Bernie speaks of his dad, Maurice, as “my hero.”  Maurice is a hyper-alert, humorous and intuitive man, a Professor of Marketing Emeritus at the University of Montreal Business School.  He affectionately refers to his son as, “little Bernie,” commenting that at age 10 months, Bernie weighed 30 pounds, which his father says was “all muscle” – so much so, that no one could lift him up!

Bernie’s performance in grade school was uneven.  As a matter of fact, in 6th grade, he was felt to have “homework-associated ADD,” which was later explained by Bernie’s scheduling his homework so that he could always do it while watching the Tonight Show with Johnny Carson.

Outside of school, responding to sub-zero Canadian winters, Bernie’s favorite sports were skiing and ice hockey.  Alas, his skills were something short of Olympic caliber, so he decided to become a serious student.

Bernie did his undergraduate work in Health Sciences and Business in Montreal, Canada.  He then considered entering the field of Dentistry, but quickly changed his mind after failing one of the admission prerequisites – carving a tooth from a block of chalk.  Bernie’s tooth might most charitably be graded as a “disaster,” said to resemble an extra body part from some prehistoric animal!

Following this misstep, Bernie found his true calling in the field of Medicine, where he excelled as a medical student at the University of Sherbrooke in Quebec, Canada, a highly sought-after medical school because of its innovative curriculum.  This was followed by two years of residency in Pediatrics at the Montreal Children’s Hospital, McGill University, and then a three-year residency in Pediatric Neurology at the Johns Hopkins Hospital, under the direction of one of the former giants in Pediatric Neurology, John Freeman.  Bernie refers to his training by John as a “game changer.”  He remembered vividly that John advised: “Be a listener; ask tough questions if they are needed; stand up for your principles.”  Bernie then completed two years as a Pediatric Fellow in Neuro-Oncology, at the University of Texas, MD Anderson Cancer Center, Houston, TX, following which he spent two years at the University of Toronto, Canada as an Assistant Professor in Pediatrics, Neurology and Hematology/Oncology at the Hospital for Sick Children.

In 1990, Bernie was recruited to the University of Florida, College of Medicine, in Gainesville, FL, as the youngest Division Chief in Pediatric Neurology in the country and the founding Director of their Pediatric Brain Tumor program.  During the 11 years that he served as Division Chief, he obtained an MBA from the University Gainesville,  with focus on strategic management.   At the Medical Center in Gainesville, Bernie was granted tenure in 1995 and was promoted to full Professor in 1998.

This was followed by Bernie’s appointment, in 2001, as Chief of the Division of Child Development and Neurology, Chairman of the Department of Child Health and Pediatrician-in-Chief of Children’s Hospital, University of Missouri School of Medicine, Columbus, MO.

In 2003, Bernie moved to the Medical University of South Carolina, Charlestown, SC as Founding Executive Director of the Charles P. Darby Children’s Research Institute, the largest pediatric research space in the Carolinas.  Additionally, he was Associate Director of the Neuroscience Institute at the Medical Center.  During his tenure at the University, he fostered collaboration among multiple biological disciplines, hired 150 investigators and their staff, and he almost tripled their annual extramural funding for children’s research.   Also, with a colleague, he established a developmental neuro-oncology laboratory, with particular focus on treatment of CNS tumors.

In 2009, Bernie was recruited to the Medical College of Georgia as Chairman of Pediatrics and Pediatrician-in-Chief at the Children’s Hospital of Georgia in Augusta, where he opened a children’s research unit and significantly increased their funding for translational research.  His Pediatric Department received the Outstanding Clinical Science Teaching Award during four of the five years that Bernie served as Chair.  During that time, Bernie obtained funding for three endowed Chairs and secured support to build a new Ronald McDonald House on campus.

Most recently, in 2014, Bernie accepted a position as Director of the newly-created Division of Child Neurology and Developmental Medicine at the Goryeb Children’s Hospital, Morristown, NJ, where he also serves as Director of their Neuro-Oncology program.  In addition to establishing a new brain tumor program at the Hospital, he has also opened a new autism center.

In Morristown, Bernie is presently Professor of Pediatrics and Neurology at the Sidney Kimmel Medical College of Thomas Jefferson University, Philadelphia, PA.

Bernie’s extensive research contributions have focused primarily on clinical and basic neuro-oncology.  Particularly well known is his work with hyaluronan antagonists in the management of central nervous system gliomas.  Paralleling his neuro-oncology research have been studies of ciliopathies, including Joubert syndrome and other hindbrain malformations, with identification of alterations in ciliary genes in a number of these disorders.  It’s ironic that Bernie was first to describe the pathognomonic neuroradiological “molar tooth sign” in Joubert syndrome, despite his having failed, years before, his chalk tooth test, when considering entering dental school!

Perhaps most of us in the Child Neurology Society identify Bernie with his superb annual symposia on the Neurobiology of Disease in Children (NDC), focusing on neurological disorders that are often challenging to treat, and with many lessons to teach.  These conferences, begun in 2001, with continuous NIH funding through 2020, are the first (and many say the best) scientific session at the Annual Meeting of the Child Neurology Society.  To date, these symposia have focused on the following disorders:  Neurofibromatosis (x2), Leukodystrophies (x2), Tuberous Sclerosis Complex, Rett Syndrome, Tourette Syndrome (x2), Spinal Muscular Atrophy, CNS Tumors, Prematurity and later Cerebral Palsy, Muscular Dystrophy, Cerebrovascular Diseases, Childhood Ataxia, Batten Disease, Mitochondrial Diseases, Autism Spectrum Disorders, and Epileptic Encephalopathy.  The proceedings of the NDC symposia have included more than 180 publications, with Bernie a contributor in 33.

Bernie has served as a member of 20 scientific societies and as an Editor and/or reviewer for two dozen medical journals.  He has had 87 funded research grants, many with innovative research on the biology and treatment of childhood brain tumors.  He has contributed 137 articles to high level peer-reviewed journals, and he has been Guest Editor of 22 scholarly books and monographs, to which he has contributed 42 chapters.  Bernie is also Editor of Current Management in Child Neurology (four editions) and a Co-Editor of the latest edition of Textbook of Child Neurology (Menkes, Sarnat and Maria).  He has mentored 27 medical students as research assistants and he has trained 16 post-doctoral Fellows.

Bernie re-married in 2015, having met his wife, Shari, a ladies fashion wear consultant, in 1980. He has a grown son, Alex, who works in Information Technology.

In addition to his remarkable energy and productivity, Bernie has been a great leader with a sparkling personality.  He radiates enthusiasm and good cheer, brightening the world of everyone around him and in an entirely selfless fashion.  He has motivated a great many people to reach for the stars.  The world of Child Neurology has been blessed to have Bernie Maria as one of our most outstanding “triple threats” – an excellent clinician, an engrossing teacher, and a superb researcher.  The luster from previous Hower Award recipients burns ever more brightly by the addition of Bernie Maria to their ranks. 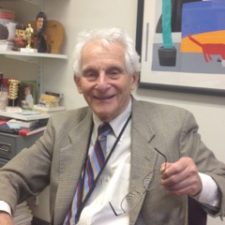