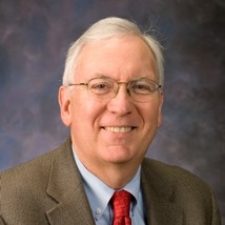 E. Steve Roach, MD is Professor of Pediatrics and Neurology at The Ohio State University College of Medicine and Chief of the Section of Child Neurology at Nationwide Children’s Hospital.  He earned his MD at University of Tennessee College of Medicine in Memphis.  While still a medical student, Dr. Roach co-authored his first book, an atlas that was the first book on computed tomography in children.

During his residency at Bowman Gray School of Medicine at Wake Forest University, Dr. Roach met James F. Toole, who became a life-long mentor and colleague. In 1967, Dr. Toole wrote the first textbook on stroke in the modern era. With the assistance of his mentor, Dr. Roach developed the keen understanding of cerebrovascular disease that he later applied to the study of children with stroke. He learned child neurology and epilepsy from Dr. William McLean and Dr. J. Kiffin Penry. From Dr. Toole and Dr. Lawrence McHenry, he developed an enduring appreciation of medical history and a love of vintage medical books.

Dr. Roach remained in North Carolina for six years after residency.  During this time, he began studying tuberous sclerosis complex (TSC). At the 1986 CNS meeting in Boston, he presented 25 patients with TSC who had been imaged with the then new MRI technology. This study helped to define the MRI appearance of the TSC brain lesions and suggested that patients with numerous cerebral lesions generally develop treatment resistant epilepsy and cognitive impairment.  In 1988, he was funded by the NIH to study family members of children with TSC. That year also saw the publication of the first edition of the book Pediatric Cerebrovascular Disorders with colleague Anthony Riela.

In 1989, Dr. Roach moved to the University of Texas Southwestern Medical Center in Dallas, Texas.  Five years later, he was awarded the Helen and Robert S. Strauss Professorship in Neurology.  One of his most rewarding roles in Dallas was serving as Director of the Child Neurology Residency Program.  He mentored several current child neurologists who acknowledge his importance to their own professional development and career.  He was recognized twice by the Dallas residents with teaching awards.  To this day, he remains in regular contact with many of his former residents, illustrating both his impact and his commitment to the careers of those he mentors.

After a brief stint back in North Carolina where we won another teaching award, Dr. Roach moved to Columbus, Ohio in 2006 to become the Chief of the Division of Pediatric Neurology at Nationwide Children’s Hospital and The Ohio State University College of Medicine. Soon after arriving, he was appointed Vice-Chair for Clinical Affairs of the University’s Department of Pediatrics. In 2013, Roach was awarded the Robert F. and Edgar T. Wolfe Foundation Chair in Pediatric Neurology.  During his time as Chief, the Division’s faculty has grown to 29 physicians with the group beginning a number of unique clinical programs. His faculty members often credit him for his excellent advice and his tireless efforts to facilitate their professional development.

Dr. Roach has authored five textbooks and edited four others. The first edition of Pediatric Cerebrovascular Disorders in 1988 was the first textbook on cerebral vascular disease in children, and it is sometimes credited with defining pediatric stroke as an important field of study.   His contributions also include over 250 peer-reviewed articles, book chapters, editorials, commentaries, and other papers.  In 2013 Dr. Roach assumed the editorship of Pediatric Neurology from founding editor Kenneth Swaiman. He has worked to create a vibrant site for research and clinical information for child neurologists and others who care for children with neurological disorders.

Dr. Roach served on the CNS Board of Directors as a Councillor from 1998-2000, and as President from 2011-13. He received the Child Neurology Society’s highest honor, the Hower Award, at the 2015 CNS Annual Meeting.

Importantly, Dr. Roach credits much of his success to his beloved wife Lisa, a now-retired children’s hospital attorney. They are a great team, and Mrs. Roach often provides encouragement, steady advice, and keen insights on important issues.

(Excerpted from profile written by Anup Patel, MD and published in the October 2015 issue of CNS  Connections)